A step off the positive path………….my rant about rudeness!!!

I try to keep things upbeat and positive on here, but something happened today that has been bothering me for a good part of the day, so please forgive the step off the positive path and allow me a moment to vent.

Here’s the scenario.  Three of us from work went to lunch with a top member of a  professional organization to discuss upcoming matters at work.  The three of us were being treated by this individual and a coworker of his.  They took us to Olive Garden (yum!) and lunch started out pleasantly enough.  We ordered beverages and the waiter (Ben) brought the drinks to the table.  He successfully delivered four of the five drinks and then his tray tipped and the last drink, an ice tea, crashed down on the table covering nearly the entire surface and spilling a bit on my seatmate (also my Dad…yes, I work in a family business!).  The waiter was horrified, apologized profusely and got a rag to clean up the mess.  We all scooted into the adjoining booth.  No harm, no foul.  Mistakes happen.  My Dad, being the super calm, nice person that he is, didn’t complain a bit.  When the manager on duty came over to inquire if anyone got spilled on, I told her that Dad had just gotten a little bit on him and Dad quickly said that it wasn’t a problem.  She said that she would make sure we had a pleasant lunch.   We continued our discussion and then received the yummy breadsticks and salad.  No problems.

When the main dishes were brought out, the waiter had someone helping him by holding the tray while he served the meals.  Already nervous at this point, I’m sure, when he was serving the person across from me, the plate slipped a bit and ended up on top of the plate of the gentleman at the end of the booth, the one who would be paying for the meal.  Ben quickly grabbed the plate and delivered it safely to its recipient.  All the other dishes were passed across with no additional problems.

Fast forward to the end of the meal.  Our benefactor received the ticket and commented that my Dad’s meal had been credited.   Then, a tray full of Olive Garden’s delicious little dessert cups was delivered to us.  The managers on duty both stopped over to make sure that everything was ok with the meal and said they hoped that the dessert would make up for any problems with our meal.  I thought that was a very generous gesture and was very satisfied with the way we had been treated and with the service we received.

Upon leaving the restaurant, Mr. Corporate Bigwig informed all of us that he didn’t leave any tip.  I was speechless.  What the heck? Seriously?????  You received one of the meals for free, along with a free dessert and yet you leave ZERO for the hard working waiter???! 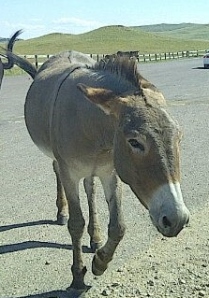 My impression of Mr. Bigwig after lunch today. (No offense to the donkey pictured!)

Yes, there were a couple mistakes, but apologies were made and I believe a more than generous restitution was made.   It bothered me for a couple hours after we got back to the office.  I could only imagine how bad our server felt.  He had probably received a reprimand from his manager and then to top it off was completely stiffed for his tip. 😦   It bothered me so much, I decided to do something about it.  I called Olive Garden and spoke with the pleasant lady who answered the phone and I explained my situation.  I said that I felt badly that our waiter received no tip just because he made a couple mistakes.  I said that I wanted to let him know that we were all (with the exception of the uncompassionate person who paid the bill) very satisfied with the service we received.  I didn’t want him to be discouraged.  I wanted to send him a tip, but at that point I couldn’t remember his name.   I was given a manager, the very person who had delivered the dessert to our table.  She explained that Ben had only been working for a week and was still learning.  She also said that he had seemed down this afternoon and when she asked if he was ok he had replied that he was, but she said she could tell he wasn’t his usual self.   She also reiterated that she had hoped the free meal and dessert would have been enough to make up for the mistakes.  I told her that it absolutely was.  I told her about how I found out that the gentleman(?) who paid the bill left no tip and asked if I could send a check for a tip for Ben.  She explained that they don’t accept checks, so I asked if I could just write it out to Ben and send it to Olive Garden.  She was very happy with that idea and said that she would let Ben know.  I hope that when Ben receives that check tomorrow or the day after it may help redeem his faith in humanity and let him know that there are compassionate people in the world.  Making mistakes is part of the human condition and I believe that Mr. Bigwig needs to step off his high horse and realize that he is human as well and has no doubt made mistakes of his own and should be tolerant when others make mistakes.

Ok, I’ll get off the road of rambling rants and back onto the positive path.  Just sayin’ when people try their best, we need to be tolerant of little mistakes! 🙂   It’s that “do unto others thing” again!  I wish all people could practice it!

I try to look for the positive in the people and situations I come in contact with! I believe in the power of positive thinking and I believe that even challenging circumstances can be learning experiences if we have a positive mindset! I'm having fun blogging at: http://picturingpositive.com
View all posts by Beth W. →
This entry was posted in compassion and tagged compassion, lunch, mistakes, Olive Garden, rudeness, tolerance, waiter. Bookmark the permalink.

9 Responses to A step off the positive path………….my rant about rudeness!!!

Going Back to Square One

Engineer by day; Frogger by night!

A blog which, like padre's man-mane, can at times be rough, pastoral, delightful, glorious, or a little unkempt

My Own Paradise: Life on Seven and a Half Acres

Mavis' blog about pets and life including Africa

Let me be lost in art, prison my tongue, set free my soul and keep open my eyes.

Talking inside my head...

All heart and a touch of snark

dealing with my chaos :)

Nature's nuances in a nutshell

You have been my friend," replied Charlotte. "That in itself is a tremendous thing." —E.B. White Charlotte's Web

A Trivial Mind At Work

Everyday is a vacation

Lifestyle , from my mind to yours

Woman to Woman and Heart to Heart...helping each other on our journey

Fill Your Own Glass

A realistic approach to an optimistic life

Mostly photography, but not always (depends on my mood)

the world is our playground

Life according to one of life’s truly gifted naturally born wafflers… an open diary of a Saffer in a different land... life in the greater Dublin & Leinster area. (Blogging since 2011) My quests fuel my dreams… my dreams fuel my quests!!

Fanning the flames of creative leadership

Stilettos or Savings
This Man's Journey

Home Is Where Our Stories Are Welcomed To Begin.

I am a man who believes romance should never die, movies make for a great night, custom suiting is a must and creating a legacy is one's purpose. A man who holds true to this understands the gentleman's lifestyle.

Nature and other curious things through the view of my lens

Simply be yourself, as if, it was possible, at least bite into it!

The View Through My Lens

Nomad of the Universe

Emptiness is a way.