If you host an exchange student, you’ll be sorry… 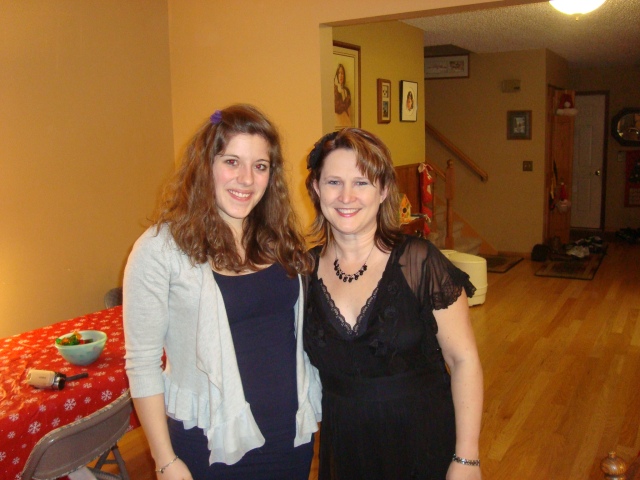 Celebrating Christmas with Muriel in 2011

…sorry to see him or her go back home.  The absolute worst part of the hosting that I’ve done is having to say goodbye to the student when the exchange time is over.  The very first exchange student our family hosted was Anja from Rapid City’s sister city, Apolda, Germany.  That was many years ago, the same year my soon to be 21-year-old son, Geoffrey, was starting Kindergarten.  At that time, we weren’t sure that it was the best decision for us.  I mean, we’d almost always seen exchange students with families that had teenagers.  Did we need a teenager to make Anja feel welcome and at home?  Nope!  (In fact, sometimes NOT having another teenager in the house allows more attention for the exchange student, I think.)  In fact, it was the perfect situation.   At the time, we had two boys, our 5-year-old son and his younger brother, Nathan,  who was 3 at the time.  Anja was like a big sister to them and fit into our family without any trouble.   In fact, by the time the school year was over, many people said that Anja sounded more like a valley girl than someone from another country.   I don’t cry very easily at all, but I can tell you that the waterworks were on full blast the day we took Anja to the airport and had to say goodbye.   Our family had the opportunity in February of 2001 to visit Anja and were hosted by her family.  That was such a memorable trip!  Her parents are the loveliest people in the world and her dad, Martin, took us to so many places in Germany, allowing us to see places we certainly never would have found on our own.

The following fall, we signed up to host another student through a different program, this time Gabriel from Ecuador.   At this time, Nathan, our younger son, was going to be starting Kindergarten in the fall.  Shortly before Gabriel arrived, we were asked to host another student temporarily until a home could be found for him.  So, we got to experience two students this time around.  Along with Gabriel, we also hosted Maximilan from Germany.   Both boys were great and fit into the family very well.  We had a bit of a challenge with transportation this time around because Gabriel attended Central High School, and Maximilian attended Stevens High School.  We figured out a way to get Maximilan on the bus before dropping Gabriel and Geoffrey and Nathan off.   Shortly after the two students arrived, we found out that I was pregnant with our daughter, Aurora.   In addition, we moved into a new home that October.  Needless to say, we had a busy household, but we made it work.  In December, another host family was found for Maximilian and Gabriel stayed with us through the school year.  He graduated from Central shortly after our daughter was born.

Fast forward to 2011.  At the time I had been divorced just about 2 years and my life had simplified about as much as it possibly could.  I was in the same  small 3 bedroom house I live in now.  Since one of the bedrooms is my “family room”,  that left the one room for me and the one that my daughter Aurora uses.  When the subject of hosting came up, I wasn’t sure that it would work in my current situation.  I’m happy to say that I decided to give it a try.  I agreed to provide a home for Muriel from Germany who stayed with me from August 2011 to January of 2012.  It was an awesome experience and I’m so glad I opened my home and my heart to her.  Since she was only here for half the school year, the time went by far too quickly!  I’m excited to say that Muriel is going to be back for a visit in August and I’m thrilled to be able to see her again.

I know that there are many agencies currently searching for host families.   While there is definitely time involved in hosting a student, the rewards are many.  Knowing that you can make a difference in the life of a student and watching him or her learn about America and learning from them in turn is wonderful.  I’m still in awe of these young people who are brave enough to travel to a foreign country, one with a language different from their own as well as different customs and culture.   Compared to that, providing a home doesn’t seem like such a big thing.

If you have every wondered if hosting a student is right for you, I encourage you to get more information.  In Rapid City, we have two sister cities; Apolda, Germany and Nikko, Japan.   EF is the organization that Muriel was with and I know there are several other exchange student organizations that would be happy to provide information about hosting!

Apolda Facebook page (no information on hosting here, but I can tell you that it is a very beautiful place to visit!)  If you are in the Rapid City area, watch the Rapid City Journal.   That was how we discovered that host families were needed.

EF Foundation – I know they need host families and would encourage you to check it out!

If you have any questions about hosting that I can answer, I’m happy to help out.

I try to look for the positive in the people and situations I come in contact with! I believe in the power of positive thinking and I believe that even challenging circumstances can be learning experiences if we have a positive mindset! I'm having fun blogging at: http://picturingpositive.com
View all posts by Beth W. →
This entry was posted in thankfulness. Bookmark the permalink.

What do you think? Thanks for visiting! Have a positive, productive day! Cancel reply

Going Back to Square One

Engineer by day; Frogger by night!

A blog which, like padre's man-mane, can at times be rough, pastoral, delightful, glorious, or a little unkempt

My Own Paradise: Life on Seven and a Half Acres

Mavis' blog about pets and life including Africa

Let me be lost in art, prison my tongue, set free my soul and keep open my eyes.

Talking inside my head...

All heart and a touch of snark

dealing with my chaos :)

Nature's nuances in a nutshell

You have been my friend," replied Charlotte. "That in itself is a tremendous thing." —E.B. White Charlotte's Web

A Trivial Mind At Work

Everyday is a vacation

Lifestyle , from my mind to yours

Woman to Woman and Heart to Heart...helping each other on our journey

Fill Your Own Glass

A realistic approach to an optimistic life

Mostly photography, but not always (depends on my mood)

the world is our playground

Life according to one of life’s truly gifted naturally born wafflers… an open diary of a Saffer in a different land... life in the greater Dublin & Leinster area. (Blogging since 2011) My quests fuel my dreams… my dreams fuel my quests!!

Fanning the flames of creative leadership

Stilettos or Savings
This Man's Journey

Home is where our story begins.

I am a man who believes romance should never die, movies make for a great night, custom suiting is a must and creating a legacy is one's purpose. A man who holds true to this understands the gentleman's lifestyle.

Nature and other curious things through the view of my lens

Simply be yourself, as if, it was possible, at least bite into it!

The View Through My Lens

Nomad of the Universe

Practical tips on how to be happier, now